There are three things that everyone wants to try upon arriving in Italy: gelato, pizza and coffee; not necessarily in that order. Knowing where to go is the first step to attaining your goal for the best of the best. However, you may desire a gelato when you are nowhere near the best shop. Knowing how to discern amongst all the possibilities will ensure an excellent choice. 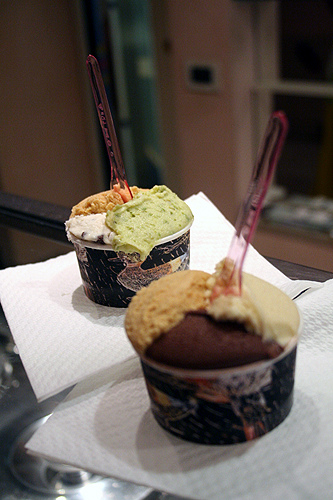 If you are wandering around and are yearning for a light and creamy gelato, you are certain to be delighted if you follow a few simple suggestions. Remember, gelato is made using a different method than ice-cream so it is a different product. I like both and my cravings for each depend on my mood.

There are many excellent gelaterie in Rome and if you heed my advice you may just discover a new favorite. Some are well known by all Romans, but I have awed my Roman friends with the ones I have encountered using these aforementioned rules.

The gelato at San Crispino is as good as you can possibly get, ever. It is light, fresh, natural and like no other. My favorite flavors are white summer fig, banana and anything with liquor in it. I have never been a fan of pistachio,  prefer to eat them as nuts rather than desert, but if you are, it is an absolute must!

I have recently discovered this amazing gelateria while waiting for the tram. The owner continuously experiments with exotic fruits from Brazil, spices and intriguing combinations. My favorites are: basil/lemon sorbet, ricotta/Cointreau/apricot gelato, guava sorbet and the mojito or piña colada granita. The ingredients are always fresh and you can taste the love and passion for quality that goes into each unique creation.

The gelato at Grom is closer to what we know as ice-cream outside of Italy. It is creamier and much denser, which I usually prefer. It is also more similar to what you might find in Liguria, where their gelaterie are called Cremerie instead.

This place is delicious. I love the variety of flavors they have such as Thumbalina/Pollicina which contains rose petals! Their Madagascar chocolate is truly to die for. They have a large variety of amazing flavors and even have gluten-free desserts.

This is my absolute favorite gelateria! My favorite flavor here is their lemongrass-yogurt and their white-peach-lavender gelato. Other superbly scrumptious flavours are Nero D’Avola wine-chocolate, raspberry-sage, white-chocolate-basil, fig-almond-mascarpone, honey-lemon-rosemary and so many more. I highly suggest you run to this place, get a number right away and taste as many flavors as you can. There are two other locations for this gelateria, but I could not find the exact addresses online. There is one on Lungotevere, near Via Arenula, one block toward the Vatican. There is another somewhere near Campo Dei Fiori, but since I always prefer the main location, I’ve never been to the third one. Go hunt it down! It’s worth it!

Napoli is the birthplace of pizza and although you can find pizza all over the world, if you want the best you must try the original. If Naples is not on your itinerary, then a pizzeria napoletana con forno a legna should be. 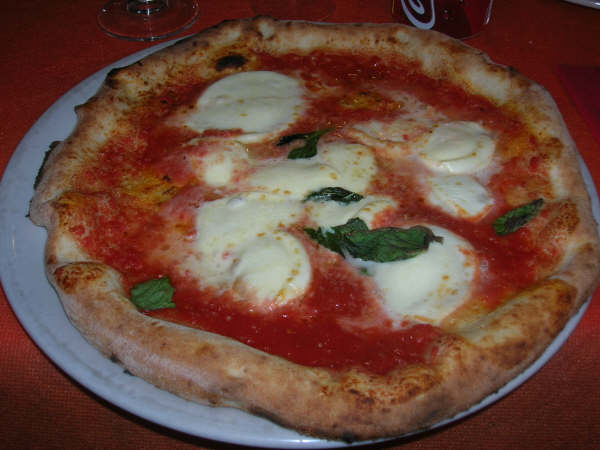 Rome boasts many pizzerias and several featuring queues down the block are included in your guidebook. Please note that many of the better-known pizzerie are not traditional but offer a Roman version of a pizza, which i Napoletani like to call ‘ a Ritz cracker’.

A pizza napoletana is delicate and thin in the middle and is ringed by a  high crust that is light and airy. You should be able to practically fold the entire pizza in four and virtually eat it in a few bites.

The well-known Roman-style pizzas are light, thin and crispy…and yes, not unlike a cracker. I must admit, I do enjoy them, however, it is not the original. Finding an excellent pizzeria on your own is not an easy task. There are, however, some signs that can help: forno a legna (wood-burning oven), menu is written in the Naples dialect (look for lots of apostrophes) and that the pizzas in front of those dining, resemble the first photo.

These are some of my favorites that have been approved by my Neopolitan and expert foodie husband:

Coffee has developed into an art form in Italy and they do take it seriously. If you wish to taste the best coffee in Italy, you will have to travel to Naples. No one is certain why the coffee is such a great deal better there than anywhere else, but many believe it is due to the water. After making coffee using the same espresso grinds and kettle but in various cities, I too have noticed the difference in quality. It tasted completely different using Swiss wate. I think it might be due to the mineral content in the water. The water in switzerland is delicious to drink alone, but it makes a bland cup of Joe. The water in Rome is full of minerals but it is not as flavorful as when you use Neopolitan water to make your java.

Wherever in Italy you find yourself to be, a good demi-tasse of espresso will come easily. If you are in Rome, then join the others on the long line of Sant’Eustachio, for it is, by far, the best in Rome…but any bar in Naples is still better.

On the other hand, if you are considering buying coffee beans or grinds as a souvenir, head to the supermarket. The top three, by most standards, are available in the coffee aisle: 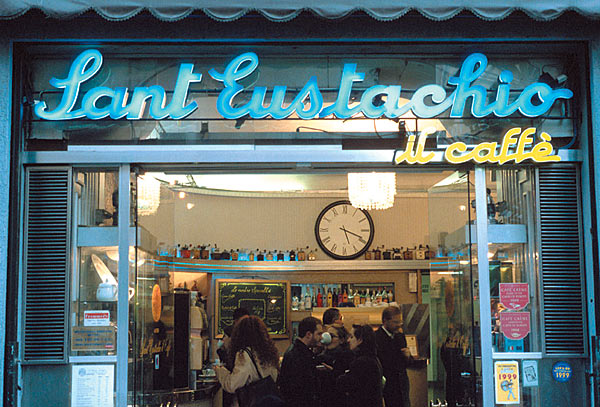 Although you will probably want to sit down to sip your coffee, it will usually cost you four times as much to do so and you will find yourself amongst the tourists, leaving the Italians at the bar. You know the saying, ‘When in Rome…blah, blah,blah’, so join them at the bar and use the money you save for something worthy.

Eating in Italy is a decadent experience that engulfs all of your senses, but keep your eyes open. Scamming tourists is practically a national past-time. Learn how to avoid scams and also how to pick an amazing restaurant in Rome.

Hit the Slopes Near Rome!

Mangiare Bene: How to Pick a Top Restaurant in Italy

In Rome with me, myself and I

The Wonders within the Vatican Museum

This just in! Sizzling Hot!

Glenys’ Rome & Beyond since September 2009

Glenys Vargas | Jazzing it up…

Glenys Vargas: A NYC Jazz Singer in Rome & Beyond

Glenys Vargas is a New York City Jazz singer/songwriter who currently lives in Europe. She is a world-class triple-threat performer who has graced the stages of hundreds of cities, spanning over fifteen countries among three continents. While in NYC she primarily performed as an actress/singer/dancer in many musicals. She has appeared in films, TV, commercials and has even modeled for Versace and Gaultier. Although she currently concentrates on Jazz, she also sings House, Pop and R&B. Glenys’ music may be heard by visiting her links. A creative person has many outlets. Writing is merely one more.

Click on the Blogroll links in order to listen to Glenys Vargas' music and watch her videos.

My main purpose for Glenys’ Rome’ & Beyond

My move to Rome was quite sudden and since then, my experiences here have been beyond the ordinary. As a NYC Jazz singer, I am not your average expat, therefore, my life here has been extraordinary on various different levels. I've experienced more of Italy than most Italians and have delved deep into why things are done the way they are.

My story is a long one, one that I shall tell, eventually. In the meantime, I am in search of my voice...as a writer. I need your help in order to find it. Please leave me all the feedback you can. I do respond. Please note that what I write is based on what I have lived and seen through my, sometimes rose-colored, glasses. Other times it is influenced by bad experiences. It is not necessarily intended to always be objective nor even-sided. I write it as I see it, that is why this is called Glenys' Rome & Beyond.

I am merely an observer who has a story to tell and hopes that you will enjoy reliving theses past years along with me.

Explore all the hidden adventures on Glenys’ Rome & Beyond!

The Reviews are in!

The Top Rated Award goes to…

I’ve got what you’re looking for…

Glenys’ Rome & Beyond: Directly to your inbox.