The French Riviera has many famous towns, but are they worth your time?

We drove all along the fabulous Côte d’Azur and explored every place that caught our eye. It was during the summer peak season. We had no maps, no reservations and a basic itinerary of places we wished to see. Saint-Tropez, Cannes, Nice and Monte Carlo were along the way, so we included them out of curiosity and found a few surprises at every turn. 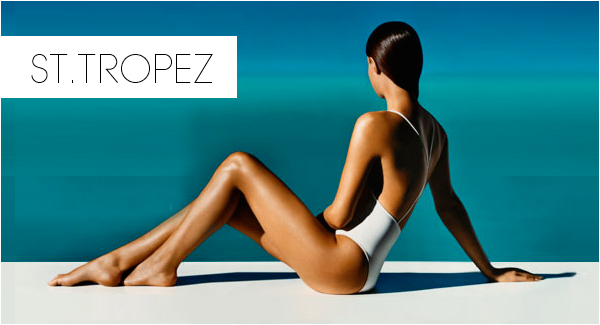 The sound of someone whispering ‘Saint-Tropez’ in my ear carries along images of beautiful women with dark golden-tanned skin, draped in luxury while bathing in the sun. Cannes makes me envision a French version of the Academy Awards. While Nice seems beyond nice, I imagine Monte Carlo to be pure decadence.

Our vacation through Provence and the French Riviera blessed us with gorgeous views, superb cuisine and surpassed every expectation. We had begun our excursion in Provence, leaving the three chicest cities of the coast for the end. After stopping in the perfume town of Grasse, where we visited a perfumery, learned about the industry by taking a delightful tour and made a few scented purchases, we drove through these famous cities, partly, to see what all the fuss was about and partly because we expected them to be great.

Saint-Tropez was most likely better at night since the beaches left much to be desired. Since then, I have made a friend who has a house there. She mentioned that it is very chic, but more about the nightlife than the beaches. It is a haven for the disgustingly rich and therefore, it is mostly as a place to see, be seen and paint red. If you want a beautiful beach, keep driving.

Cannes and Nice were… well… nice, but neither managed to maintain our interest. These two cities were most likely charming once upon a time, but I feel the charm has been misplaced in recent years. Luckilly, we know where it went. We wanted to find smaller picturesque towns where we could fall in love with the architecture, the fauna and the atmosphere. Since we were Chic Camping the entire length of our journey, we went directly to our last destination, which was a campsite overlooking Monte Carlo. I know Monte Carlo is far from a small town, but had we driven any further we would have returned to Italy.

The best part of Monte Carlo is what is nearby…Ezé! 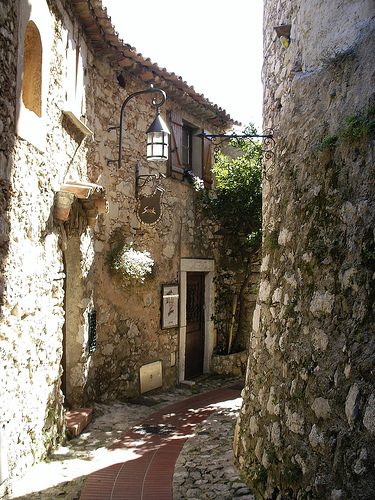 The charm grabbed us by the arm and swung us around when we stumbled upon the glorious little medieval town of Ezé. It spiraled up a dizzying steep hill like the back-end of a wasp and glowed its amber light at night. We climbed up and explored the little shops, art galleries and exquisite restaurants. Ezé is the brilliant gem that we were seeking. We ate at a lovely restaurant with a beautiful blooming garden. It was magical with twinkling lights in the trees, the medieval stone structures which shown in the moonlight and the wonderful company of my man who lovingly gazed at me in the incandescent candlelight.

We were entertained by the cat playing peek-a-boo followed by a little boy who lost his toy dinosaur. An elderly man sitting with a group had taken it and watched the boy’s confusion grow. I am not fluent in French, in fact I can barely order a meal, but sometimes things are just obvious.

“What are you looking for?”, said the man.

“Well did you check over there?”, said the man as his friends giggled, watching the boy look under the table.

“It’s not there either.”, said the boy, looking a bit glum.

“Hmm, oh wait, I think I saw a dinosaur over there!”

“There it is! – Wait a second, I looked there before… – Hey, you had it all along, didn’t you?”, accused the smart little boy and the whole table laughed.

We returned to Ezé several times for breakfast, lunch and dinner. We had the best croissant there and found the most interesting souvenirs. There was even a spice market which left my mouth-watering and a beautiful hat shop with a Breakfast-at-Tiffany’s-esque hat that I still kick myself for not buying. Unfortunately, when you are nearing the end of your vacation, you also near the end of your budget.

We were told that the best beach in the area was Cape Mala in Cape D’Ail, a town on the border of Monaco. There were beautiful villas nestled in the hills along the walk down. Once we had arrived, we were greeted by two chic, yet lonely, beach establishments which featured a spa, restaurant, lounge and live music. The remaining expanse of shoreline was a glorious free beach complete with fresh-water showers. 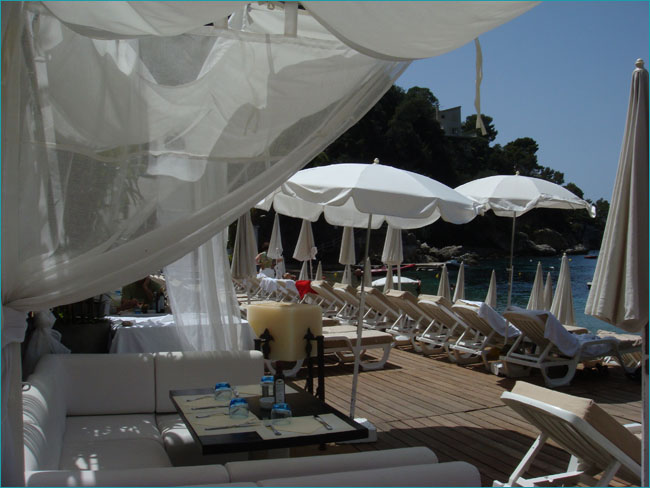 Although we opted for the free beach, where we could be alone, we later dined under the canopy of the beach-side restaurant/lounge. We watched the sun set to the DJ’s hot chillout beats at Le Reserve.

Monte Carlo was a must-see but I was a bit disappointed at what I saw. We illegally parked our car at a bus-stop, then explored the casinos. My boyfriend was interested in a game of Texas Hold’em and I would try my best to be patient enough to sit through one. 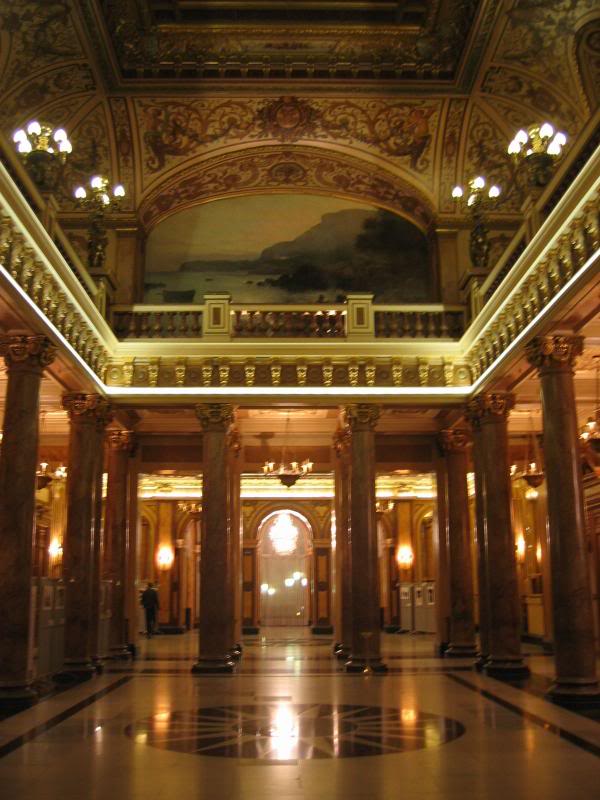 We paid the €10 entrance fee in order to see the pièce de résistance, the Monte Carlo Casino, but we did not gamble. We were actually more enthralled by the artwork and architecture which was sublime. We felt as though we were in a royal palace but no one else was aware of it; they were too busy gambling to appreciate the beauty of their surroundings. We finally found the casino with the Texas Hold’em table and immediately ran into some friends of ours from the Amalfi coast. 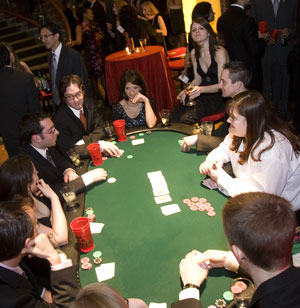 One was at the Texas Hold’em table, whose minimum bet was set at €1000. My boyfriend, having previously decided that he would limit his loss to €300, ended up joining me and his friend’s girlfriend at the bar instead. 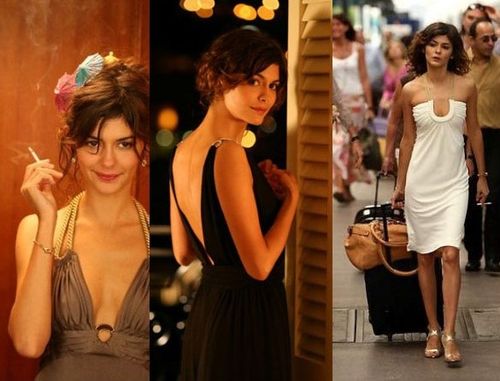 As we were sipping our refreshing glasses of Coca-Cola full of ice with a lemon wedge, just how we always order it, we could not help but notice the gorgeous women clad in Haute Couture. They reminded me of Audrey Tautou in Priceless, where she played a high-priced Monte Carlo call girl. These high-class prostitutes were everywhere and they were so beautiful, elegant and impeccably dressed that one could not avoid admiring their style. Our friend had been in Monte Carlo with her boyfriend for a few days, during which she had experienced an uncomfortable situation the previous evening.

“It’s beautiful here, but he likes to gamble at night, so I just sit at the bar and watch. Last night, I walked outside for a smoke and this guy propositioned me.”

“What? Are you kidding? – What on earth were you wearing?”, I said imagining her in a skimpy dress.

“I was dressed kind of like I am now… jeans, sneakers, a white loose cotton sweater and I had my hair in a pony-tail.”

“OK, Smoking Lolita, what did he say when you kicked him? You did kick him, right?”

“No, I was kind of shocked. I shook my head and told him I’m just smoking while my boyfriend gambles and he was so embarrassed at his mistake that he fell to his knees and begged my forgiveness.”

“Yeah, I bet he had a foot fetish! Beware of men who fall to your feet, they might try to lick your shoes.”

While we sat there sipping our over-priced Cokes, I began to think about living in such a place where men assume you are a prostitute merely because you are an unaccompanied woman. I would never have dreamed that mentality continued to exist beyond the middle ages. We were only in Monte Carlo for one night and we did not wish for more. Next time I am in the area, I will give it another chance and try to keep an open mind, knowing full well that I must be accompanied, otherwise I might have to slap someone silly.

The Côte d’Azur of France is très magnifique!

Although the three most popular cities of the French Riviera were mostly a flop in our book, the remaining lesser-known towns and villages were beyond wonderful. We were so impressed by the cleanliness of the cities; the courteousness, cordiality and helpfulness of all its people; the self-cleaning public bathrooms, which were always well-stocked with toilet paper and paper towels; the delicious cuisine, which I am still craving and most of all, the splendor of its natural beauty, which has been admirably maintained.

I highly urge you to go and explore for yourself. We will certainly return as soon as possible. Although I have the Amalfi Coast nearby, the French Riviera is a completely different experience. Stay tuned for more on the amazing Côte d’Azur…Cassis et des Calanques, Hyères and so much more.

More about Glenys’ adventures in France:

Mangiare Bene: How to Pick a Top Restaurant in Italy

In Rome with me, myself and I

The Wonders within the Vatican Museum

This just in! Sizzling Hot!

Glenys’ Rome & Beyond since September 2009

Glenys Vargas | Jazzing it up…

Glenys Vargas: A NYC Jazz Singer in Rome & Beyond

Glenys Vargas is a New York City Jazz singer/songwriter who currently lives in Europe. She is a world-class triple-threat performer who has graced the stages of hundreds of cities, spanning over fifteen countries among three continents. While in NYC she primarily performed as an actress/singer/dancer in many musicals. She has appeared in films, TV, commercials and has even modeled for Versace and Gaultier. Although she currently concentrates on Jazz, she also sings House, Pop and R&B. Glenys’ music may be heard by visiting her links. A creative person has many outlets. Writing is merely one more.

Click on the Blogroll links in order to listen to Glenys Vargas' music and watch her videos.

My main purpose for Glenys’ Rome’ & Beyond

My move to Rome was quite sudden and since then, my experiences here have been beyond the ordinary. As a NYC Jazz singer, I am not your average expat, therefore, my life here has been extraordinary on various different levels. I've experienced more of Italy than most Italians and have delved deep into why things are done the way they are.

My story is a long one, one that I shall tell, eventually. In the meantime, I am in search of my voice...as a writer. I need your help in order to find it. Please leave me all the feedback you can. I do respond. Please note that what I write is based on what I have lived and seen through my, sometimes rose-colored, glasses. Other times it is influenced by bad experiences. It is not necessarily intended to always be objective nor even-sided. I write it as I see it, that is why this is called Glenys' Rome & Beyond.

I am merely an observer who has a story to tell and hopes that you will enjoy reliving theses past years along with me.

Explore all the hidden adventures on Glenys’ Rome & Beyond!

The Reviews are in!

The Top Rated Award goes to…

I’ve got what you’re looking for…

Glenys’ Rome & Beyond: Directly to your inbox.